To promote the awareness of Swine Flu, a unique campaign was designed to target students at the University of Chester.

The campaign was spearheaded by an ‘anti-mascot’, which characterised Swine Flu as a real, live, larger than life person named Viral Man. I took on the role of Viral Man for the duration of the campaign’s development.

A wide range of campaign assets were developed to appeal to the student demographic. This included two poster campaigns which were used on all university premises, a special logo warning people that “Viral Man operates in this area” and beer mats with the logo on either side.

In addition to the above, the campaign targeted new arrivals at the university by sourcing 2,500 keychains designed to look like the Swine Flu virus and designing a tag to attach to them, further promoting the awareness of virus. A set of 2,500 stickers were printed which were then randomly stuck on people to show how easy it is to become infected.

To support the profile with content and a further understanding of who and what Viral Man was, a series of short videos were filmed, each showing a separate symptom of Swine Flu and how Viral Man can cause it. These videos were then uploaded to a YouTube account set up in Viral Man’s name. The videos can be viewed here.

In addition to the short videos, an interview with Viral Man was filmed, documenting his rise and fall from power as people began to take preventative measures against him. The interview included cut-away clips to the short videos mentioned above. The two minute interview was shown to 1,500 new students when I presented it to them at their first welcome meeting and was met with applause.

As well as the above campaign materials, Viral Man will make appearances in person around the university’s campus at various times of the year to keep the level of awareness high. So that anyone can play the role of Viral Man, a Character Profile manual was designed, detailing how Viral Man should act.

The campaign has since been featured in press, including the Chester Chronicle, Nursing Times and The National Student.

Professor Tim Wheeler, Vice-Chancellor of the University of Chester
“Viral Man has generated quite a buzz at a time when the University is at its busiest, welcoming new students and staff, and when the country as a whole is bracing itself for the second wave of the pandemic. Some real imagination has inspired the campaign, which is both attention-grabbing and fun.”

Dr Lesley Cooke, Dean of Students
“Students are notoriously sophisticated, but elusive when it comes to absorbing messages about their health and safety. So, the idea of employing a team of recent students was to ensure that we were speaking the same language. It became absolutely clear to us that the campaign was doing its job perfectly when we saw the reactions of students watching the video during Induction Week. Their positive response to the personal appearance of Viral Man was most encouraging.”

Karen Cregan, Assistant Director of Human Resource Management Services
“The real challenges were to create a cost-effective multi-media campaign from start to finish in just four weeks, which would attract the attention of both students and staff. Viral Man has managed to achieve that, through a careful consideration of the key messages and the audiences involved. He’s quite a talking point around the University.”

Jayne Dodgson, Director of Corporate Communications
“There’s some very clever reverse psychology involved in the campaign. Although common sense dictates everyone should be wary of Swine Flu, Viral Man is so charismatic that people are being drawn to him and therefore take more notice of the serious advice which they have seen or heard hundreds of times in association with the national flu campaign and may have started to become ‘immune’ to. Posters have been disappearing off the walls, which we take as a sign that they’ve become collectables…or perhaps Viral Man’s been at work!”

Gay Rabie,  Pandemic Flu Co-ordinator
“The Viral Man campaign is so comprehensive that it is helping us not only to spread the word about the practical hygiene measures which we have taken across the University, but also to ensure that the procedures which students and staff need to follow if they become ill are communicated in a way that is meaningful.” 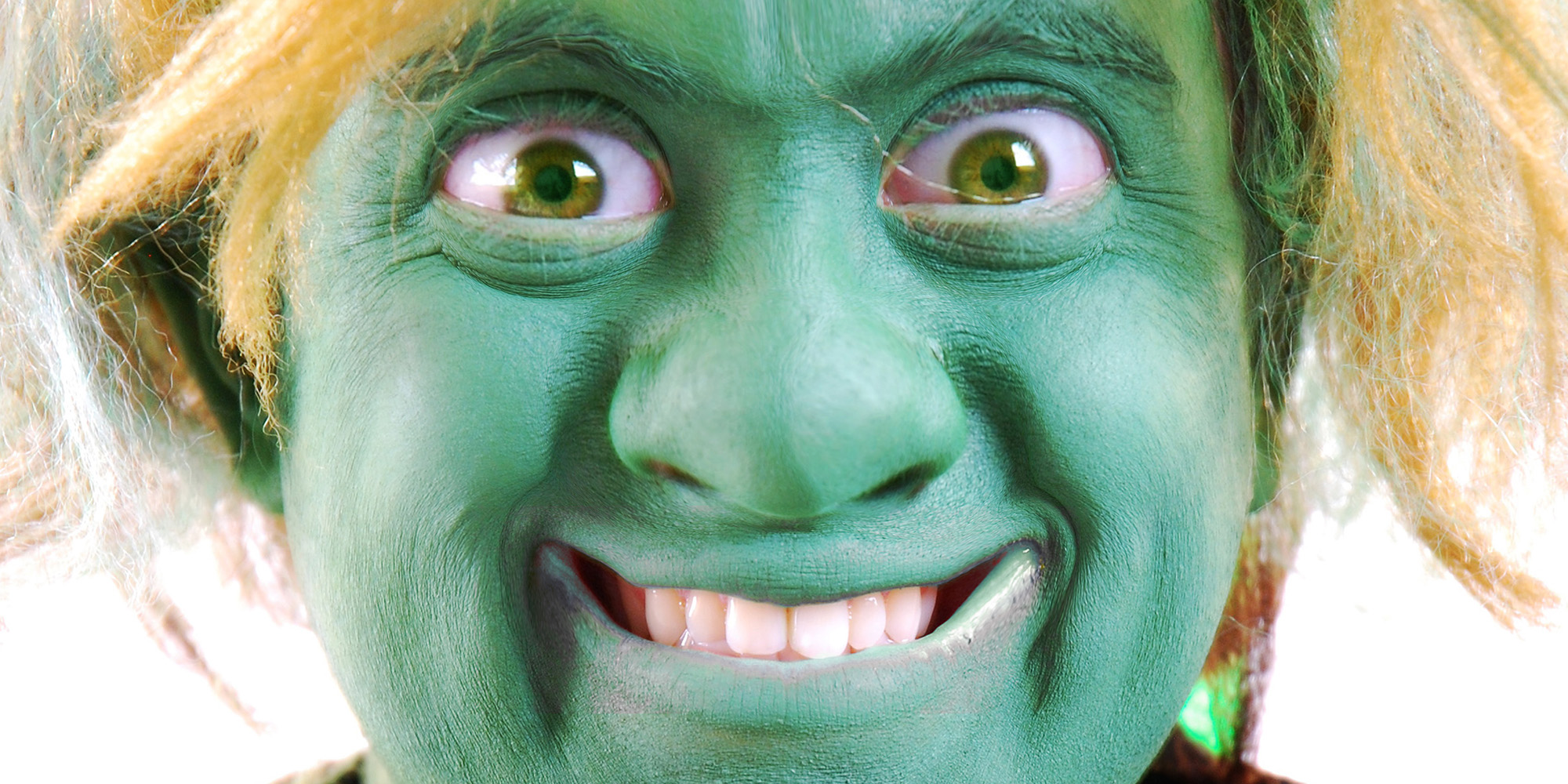 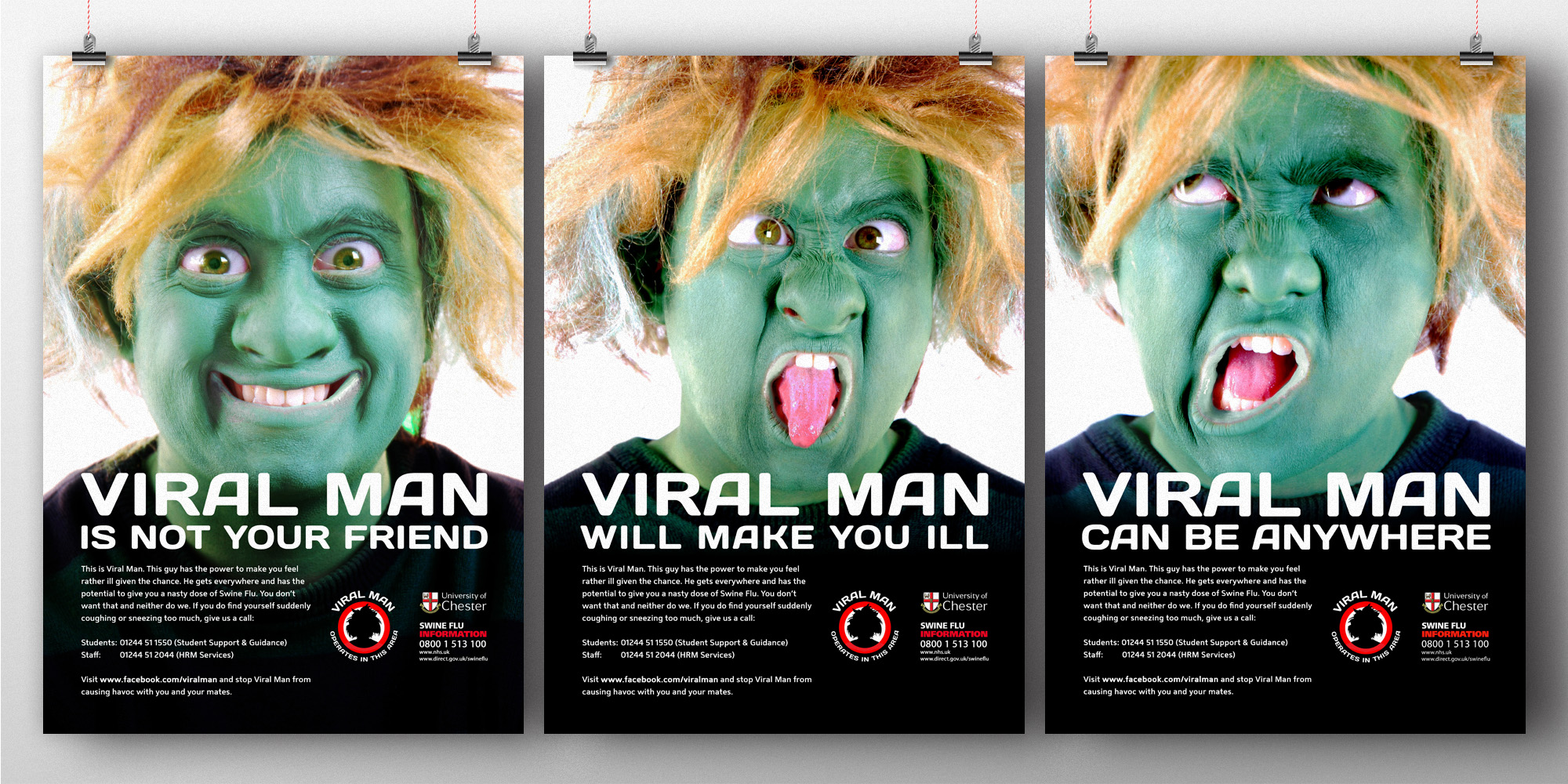 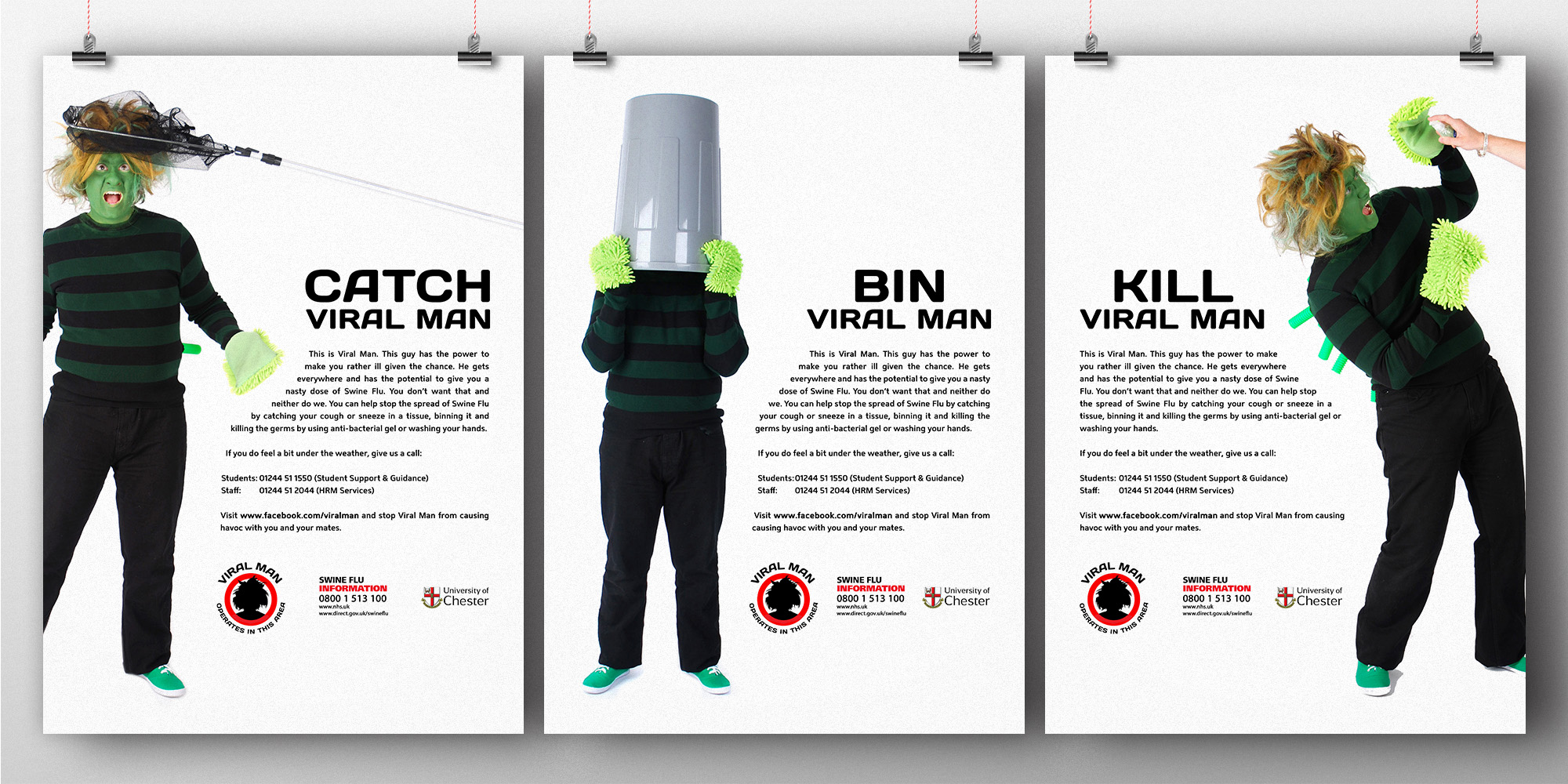 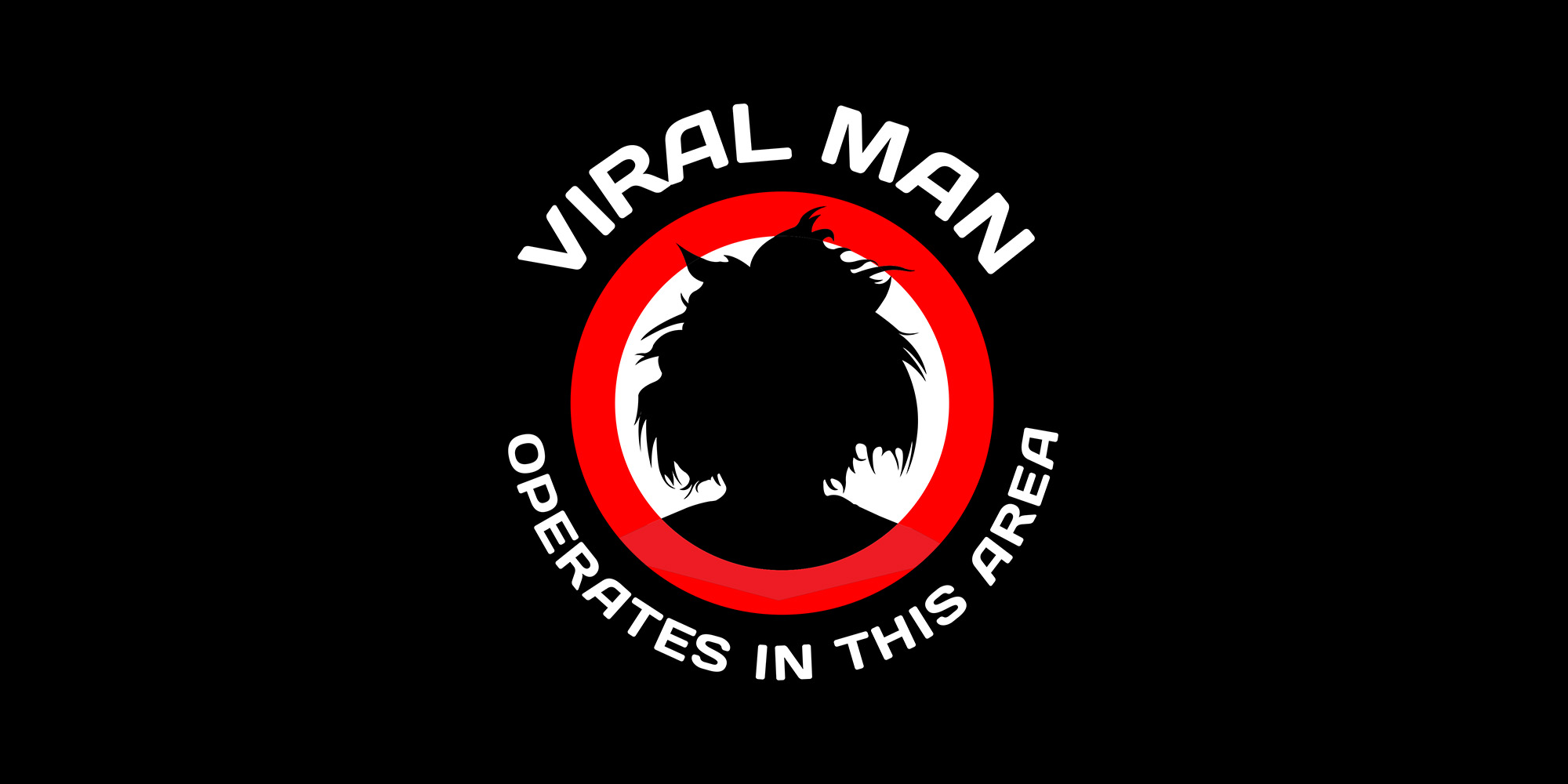 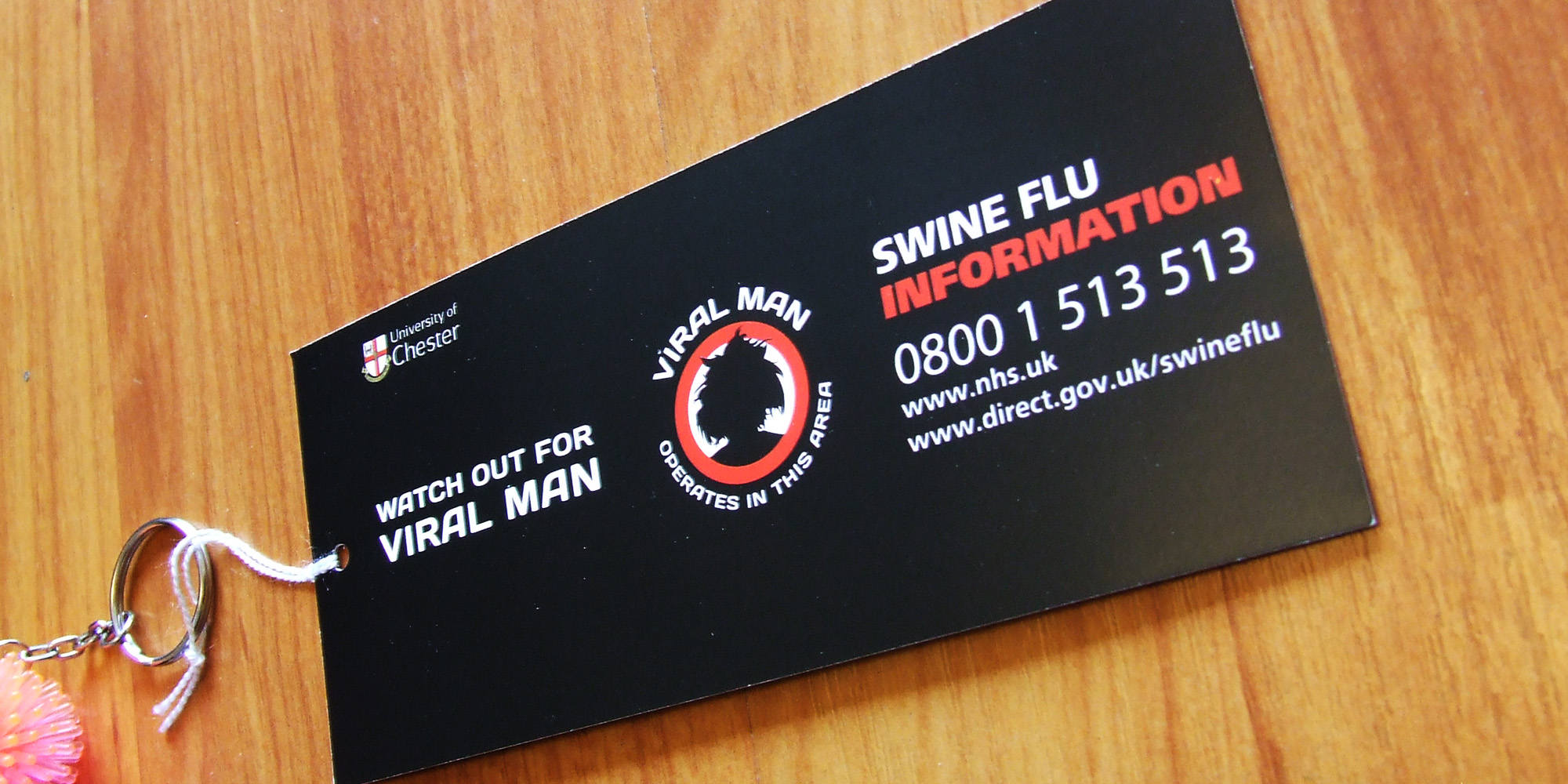 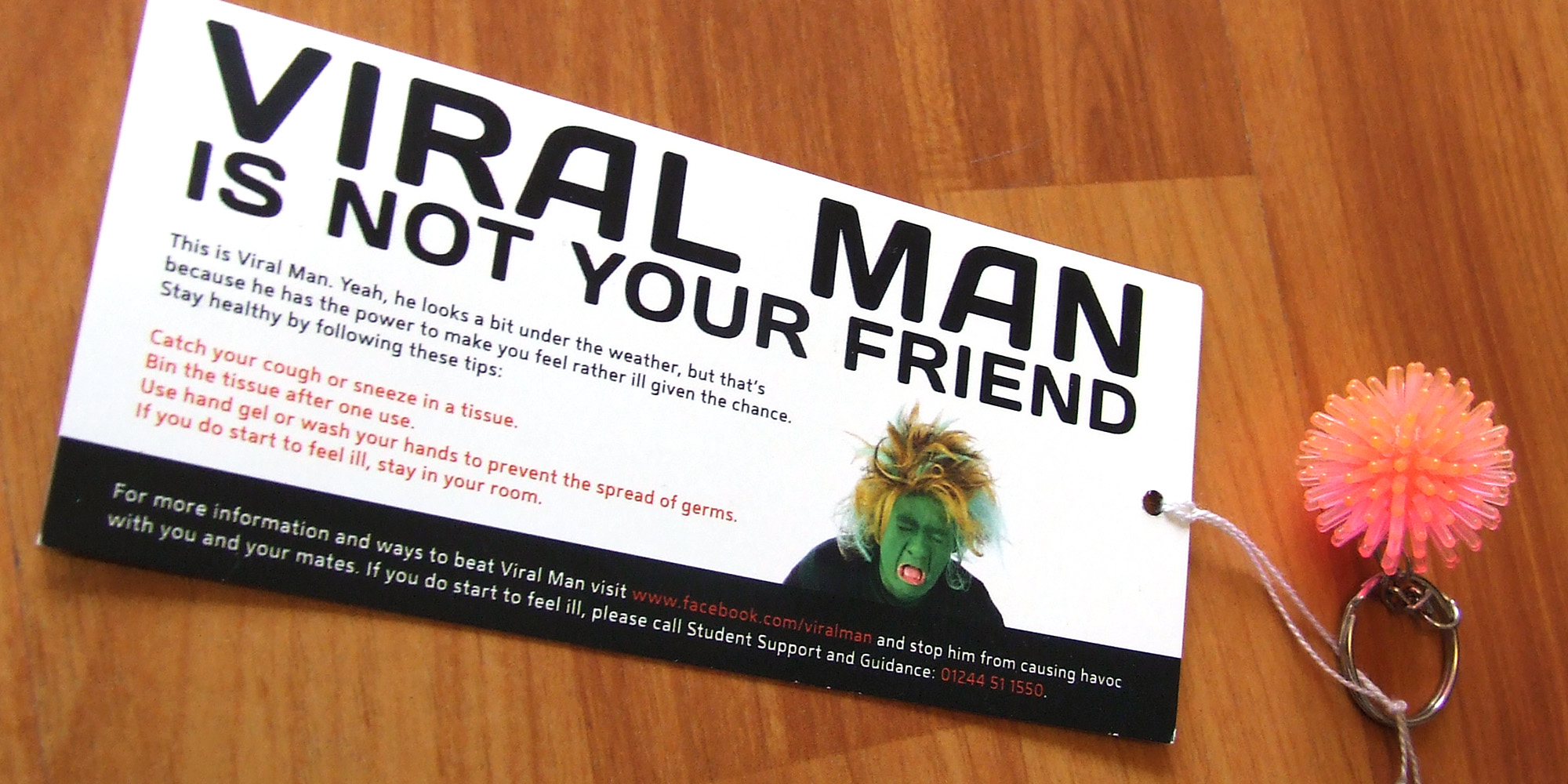 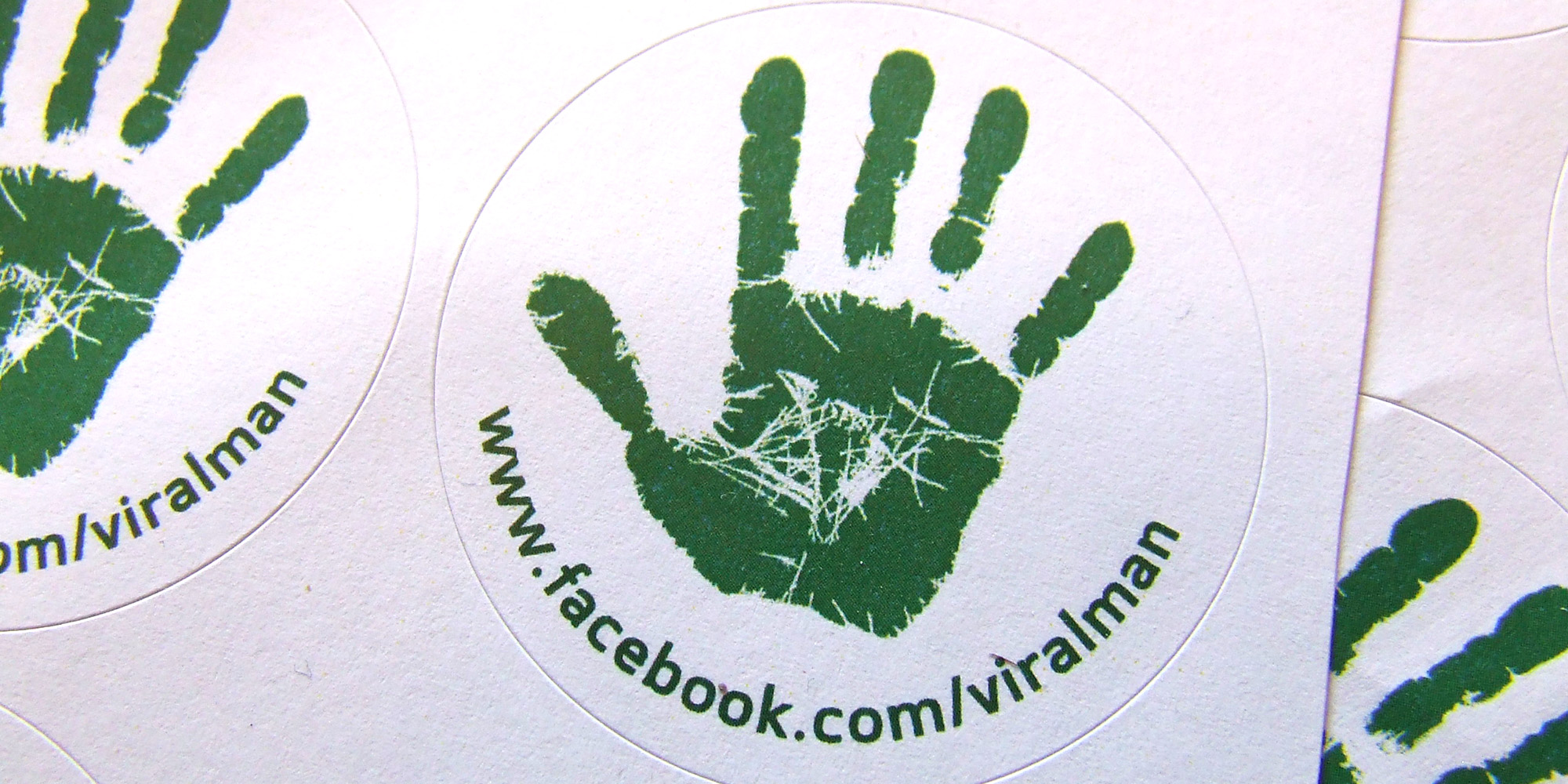 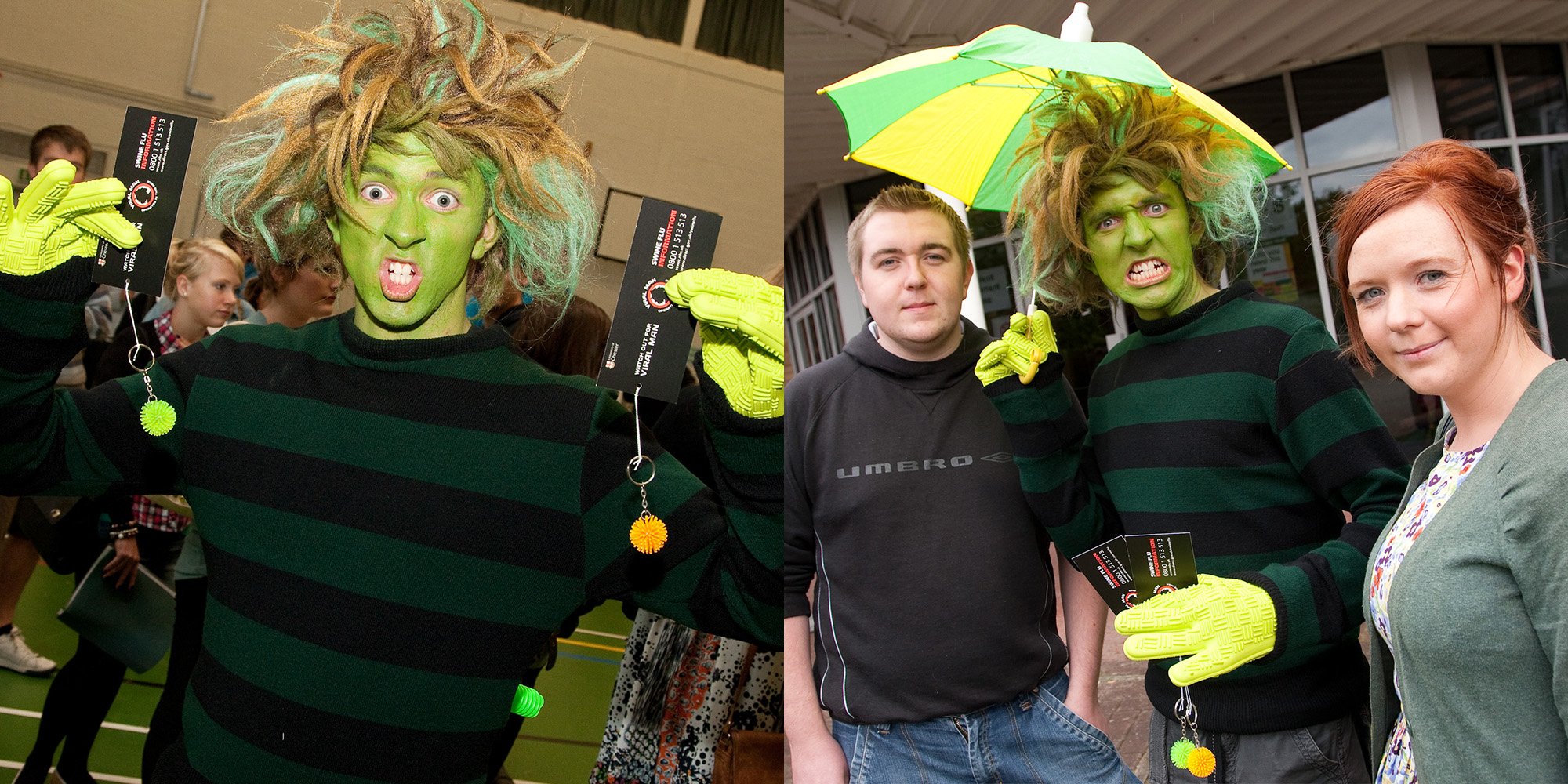