The power of advertising

This is an article I originally wrote January 16th, 2006, but I think it’s inclusion in this blog is quite relevant.

Today I want to talk about TV adverts. While most people probably don’t pay that much attention to them, they are the most important thing you’ll ever see on TV aside from the programs themselves (although some would argue that). They’re big business and businesses will do anything to make sure their advert and their product is directly in front of you and that you’re taking note.

I’m going to talk about three ads from three different companies; Honda, Audi and Sony. These ads in particular have made me sit up and pay attention and therefore remember what the advert and brand was. Most definitely a good thing for these companies.

“The Power of Dreams” is Honda’s slogan and with the kind of adverts that they’ve been producing for the last few years (or rather Wieden+Kennedy, the creative agency behind them), they really stand out.

Mention “Cog ad” to anyone who watches TV or uses the Internet and I’m sure they’ll know instantly what ad you mean. Now one of the most famous adverts around the world (even though it only aired on TV in the UK) thanks to viral marketing, Honda has managed to create free advertising for itself, simply by creating a good advert – which it was going to do anyway. Honda had to pay a few million pounds to get this 2 minute long masterpiece created and then splash out on actually paying for it to air on TV. However, since the cog ad is now a worldwide success online, Honda have easily made up their money in free advertising. But anyway, it’s not the cog advert I want to talk about, it’s Honda’s latest offering.

When I first saw it, I was sitting on the floor, playing with my cat when I heard Garrison Keillor, the voice of Honda simply say “This is what it feels like to be a Honda”. I immediatly paid attention. See last paragraph for reasons why.

What follows is a two minute symphony of sounds created by a chorus of ‘singers’. For example, in one part of the advert, the singers tap on their teeth repeatedly to describe the tyres of Honda’s new Civic rolling over gravel with a depiction of a car actually doing it. There is no music, there is no narration, just these unusual – and yet familiar – sounds that the chorus of singers are making to imitate a car. I sat mesmerised, watching and listening happily for the two minutes that the advert was on and felt truly happy that I’d had the opportunity to watch it because it was so impressive in such a subtle way.

And that’s how adverts should be.

Of course, Honda, being the kind people they are, are offering everyone the chance to watch this advert over at their site, so please do go and watch it. You won’t be disappointed. 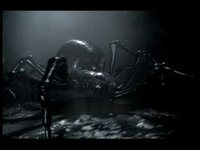 If Honda relies on simplicity and subtlety, Audi is the opposite with it’s recent “in your face” closeups of an Audi driving towards the viewer and stopping just a few metres away.

This ad caught my attention not for the visuals, but for the choice of sounds the people at Bartle Bogle Hagerty (the creative agency behind the ad) had chosen; Just a few simple notes played on a violin was all it took to get my attention. At the time, I was in the kitchen, but the arrangement of the notes was enough to make me come into the living room and see what it was.

My first thought was that it reminded me of Lord of the Rings: The Two Towers, when Shelob, the giant spider stalks Frodo. It has exactly the same kind of atmosphere only instead of her prey being anything with two legs, it is instead four wheels, as you see cars hanging from the ceiling with masses of cobwebs. While the advert only lasts for around 30 seconds, the atmosphere has been created well enough that you can immerse yourself in what could easily be a scene straight out of a movie and to that end, you even get the aforementioned giant spider scuttling towards you, only to change into an Audi RS4 Quattro by the time it’s up close and personal. It’s impressive. In addition, the words “Vorsprung Durch Technik” are spelt out in cobwebs at the very end of the advert in such a way that it adds a second punch to the minor shock you’ve just gotten from seeing a giant spider coming towards you.

It’s a very well made piece of advertising. If you’d like to view it, visit4info.com has a copy of it. 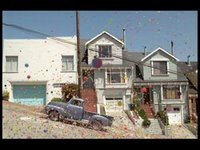 Lastly, but my no means least is Sony’s impressive advert for Bravia, the new LCD TV that’s “like no other”, which takes a leaf out of Honda’s book and goes for the subtle approach.

Using a piece of beautiful music by José Gonzaléz entitled “Heartbeats”, Fallon London (The creative agency behind the ad) have created something really special. There really is colour “like no other” – at least in this advert. It’s truly mesmerising seeing a multicoloured tidal wave of balls bouncing down a street. Like the two adverts I’ve mentioned already, I instantly felt that I had been shown something well worth watching and something worth watching more than once. Sony Bravia as a product may or may not be any good, but the quality of this advert instantly makes it a lot more famous that it would probably ever be without it. Personally, I feel that Sony aren’t particularly famous when it comes to creating memorable adverts, but they’ve really achieved it with this one.

Furthermore, unlike most impressive adverts that have sites attached to them, Sony’s bravia-advert.com [link no longer works] has an adequate amount of information relating to the advert itself, including the edited version of it, the uncut version of it (both available in HD format too) and even behind the scenes clips and photos. They’ve even bothered to offer some high resolution wallpapers which impressed me, along with a Flickr album. By far the best website I’ve seen regarding an advert for a while.

Three adverts, all different, but all have something in common – they kept me watching. And if they keep you watching and you actually enjoy watching them, then at what point does an advert become more like a program? That is to say, if adverts can look this good and some adverts can last for two or three minutes, what makes a program more important than an advert?

If an advert is produced so well, who’s to say that you can’t sit down in front of the TV specifically to watch some great ads? You get to be entertained for a few minutes and the companies get their marketing. I’d say that was a fair deal and I hope that in the future, more companies begin to see that investing heavily in their advertising to make it entertaining rather than simply informative works so well.